Amyloidosis is a rare disease caused by abnormal deposition and accumulation of proteins in the tissues of the body.

Amyloid deposits cause disease by gradually accumulating within organs and thereby disrupting the structure and damaging the function of the affected tissues. In some cases, previously healthy organs can be substantially replaced by extensive amyloid deposits.

Organs that may be affected by systemic amyloidosis include the: 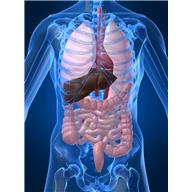 Sometimes the organs affected and the patient’s symptoms are related to the type of amyloid fibril, but in many forms of amyloidosis there is little or no clear correlation between the fibril protein and the clinical findings.  Nevertheless, in order to provide appropriate treatment, it is always essential for doctors to identify the amyloid fibril protein.

Less frequently, localised deposits of amyloid may appear just in one area, such as the airways, skin or bladder.

Amyloid deposits can form in almost any tissue of the body. Therefore the symptoms and signs of the disease can vary greatly and are often vague and not specific. Many patients undergo extensive testing and see several doctors before the diagnosis is made.

Once a doctor suspects that amyloidosis may be present it is possible to confirm the diagnosis quite easily. However, since amyloidosis is rare, with only about 500-1000 new cases diagnosed in the UK each year, and the symptoms are so non-specific, it is not a diagnosis that springs to mind readily for many doctors and missed diagnosis and delayed diagnosis of amyloidosis are common.

The safe, painless SAP scan enables doctors at the National Amyloidosis Centre to pinpoint the exact location and amount of amyloid within the body’s organs.

Sequential SAP scans from a patient with AL amyloidosis. In 2005 the scan showed significant deposits in the liver and spleen. The scan in 2009 showed considerable shrinkage of the deposits after a good response to treatment. In 2011 there was a relapse and the scan showed amyloid building up, this time in the kidneys.
Reproduced from: Journal of Immunological Methods 384;Issues 1-2, 2012, 92-102

Serum amyloid P component (SAP) is a normal blood protein, present in everybody, which is always present in amyloid deposits of all types  because it binds strongly to all amyloid fibrils. The whole body SAP scan was invented by Professor Sir Mark Pepys FRS in 1987 and developed by him and Professor Philip Hawkins, the Director of the National Amyloidosis Centre, into a routine clinical test which provides a unique assessment of both the initial extent of each patient’s amyloidosis and the degree to which the amyloid deposits regress during therapy.

Recent years have seen important strides forwards in treatment and the outlook for patients diagnosed with amyloidosis today is far better than it was even a few years ago.

In some types of amyloidosis currently available treatments may even lead to complete cure, while in others, there may be extended symptom free survival. Twenty years ago the life expectancy of patients diagnosed with amyloidosis was usually only a few months or years, whereas now it is often 10 years or more.

Currently available treatments differ considerably for the different types of amyloidosis, but they all focus on reducing the availability of the proteins which form amyloid fibrils (precursor proteins). In many cases patients benefit considerably from these treatments, with regression of amyloid deposits once the precursor supply is stopped and subsequent substantial health improvements.

Amyloidosis is never contagious and it is not cancer, although AL amyloidosis is treated in a similar fashion to a bone marrow cancer called myeloma.

Many patients with AL amyloidosis respond well to treatment with chemotherapy drugs administered with treatment regimes similar to those used in myeloma, and stem cell transplantation is a successful approach in some patients.

Any cookies that may not be particularly necessary for the website to function and is used specifically to collect user personal data via analytics, ads, other embedded contents are termed as non-necessary cookies. It is mandatory to procure user consent prior to running these cookies on your website.